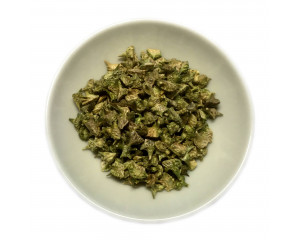 This product has a minimum quantity of 9

Tribulis terrestris (100g) can be found in a wide range of temperate and tropical habitats, including northern Australia, Asia, South America, North America, Southern Europe and African and can even grow in desert regions. It  has been given many names: devil’s weed, gokshura, caltrop, amongst countless others.

From time immemorial, the plant has been strongly associated with sexuality and thus was connected to many institutions celebrating sexuality. In India, it has been used for centuries to treat sexual disorders in both men and women.

In order to produce a tonic yourself, grind the seeds, place them in a mixture of water and alcohol for a day, and then taking a tablespoon of the resultant liquid three times a day. This mixture is attributed to a the 'manhood' promoting effect.

In Pakistan, roughly 10- 20g of ground seeds are brewed in hot water and then drunk as a sexually stimlatng brew. Three cups of Tribulis tea per day can help to burn fat.